What A Book is Worth 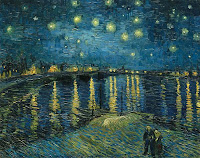 Just returned from San Francisco, where I saw Van Gogh's Starry Night Over the Rhone, part of a show of post-Impressionist masterpieces from the Musee D'Orsay in Paris. I've never seen a painting so alive. Even though you could get fairly close and study the brushwork—particularly how color was applied to show light reflected on the water—when you stepped away the river actually shimmered. Gorgeous.

Of course, the discussion at dinner included a lively debate about what gives art its value. Critics derided the Impressionist movement itself until the work began to sell and then—wonder of wonders—suddenly the artists were welcomed at the Paris Salon with open arms. We were blind but now we see! What mastery! What genius!

Writers face the same issues, I think, especially women.  To cite just one example, in high school I took an elective class on Black Literature. Not a lady in sight. I didn't discover Zora Neale Hurston until years later and was stunned to learn she was a co-founder of the Harlem Renaissance that I supposedly studied as a junior.  Her masterpiece, THEIR EYES WERE WATCHING GOD, is a stunning read, yet it wasn't until Oprah brought that book to her audience that Neale Hurston began to receive the acclaim she richly deserves (although the less said about the messy made-for-TV version, the better).

What do you think? Is commercial success the defining factor that makes any art valuable? Or do you need the blessings of the critical elite?
Posted by kathrynjankowski at 7:14 PM 7 comments

Labels: Their Eyes Were Watching God, Writing
Email ThisBlogThis!Share to TwitterShare to FacebookShare to Pinterest

Can Witches Be Good?

Angela Ackerman ran another of her terrific thesauruses, this one covering symbols considered evil (link below). Witches, of course, made the list. Because when you think of them, they're always nasty, right?

We all know the classic witches. The snaggle-toothed crone offering Snow White deadly fruit. The green-skinned hag coveting Dorothy’s ruby slippers. The withered beldam fattening up the children who nibbled at her house. Nothing nice about ‘em.

I don't have a problem with the label. It's a stereotype, sure, but therein lies the challenge. A well-crafted villainess is a delight to read; the trick is to give readers a flesh-and-blood character, one neither wholly bad nor absolutely pure. Something in-between Glinda’s saccharine sweetness and Elphaba’s deviltry. A few authors who have already done so:

Donna Jo Napoli tweaks one witch’s image in THE MAGIC CIRCLE. In this compassionate retelling of Hansel and Gretel’s tale, we meet the “Ugly One”, a devoted mother who loses her healing powers and battles demons that demand she eat flesh. Her resolve holds until two lovely, delicious children arrive at her candy-strewn cottage. It isn't Gretel’s ingenuity that saves the day, but the old woman's decision to sacrifice herself rather than give in to fiendish urges. A nice twist.

I know of only a couple other books that strive to show witches in a sympathetic light, including Gregory Maguire’s WICKED, which I’ve put off reading. Why? Because I saw a bit of the play on a TV show and thought it was ridiculous, some song about the Elphaba (the future Wicked Witch of the West) wanting to be popular. No, no, no. This is magical land of Oz we’re talking about, not high school. 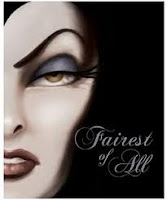 It appears the newest remake is FAIREST OF ALL by Serena Valentino. Love the cover. Can’t wait to read it. I was terrified of the warty-nosed witch from Disney’s movie, and literally thought my 9-year-old heart would burst when I was on the Snow White ride at Disneyland and it broke down just as the black-cloaked cackler thrust a poisoned apple in my direction.

Of course, there’s a cultural bias against women who exert their prowess, particularly those who attune themselves to nature. Condemning them as consorts of the devil is an easy way to mask fear and ignorance. So, while a few books may attempt to mitigate the damage, I doubt there will ever be a time when we don’t associate witches with evil. The connection is too ingrained in our collective unconscious.

What do you think?