JibJab Does It Again!

Something I found while sitting at my laptop on a gray and drizzly day. Enjoy!

Posted by kathrynjankowski at 2:56 PM 2 comments

Who's Your Favorite Dracula?

If you’re a fan of vampires, you know these lines:
“Listen to them,
Children of the night,
What music they make!”

Gorgeous words, spoken by many an actor. Of all those who've portrayed Count Dracula, there's none better than Gary Oldman. Sexy, thrilling, dangerous. Yeah. Coppola’s film is a grand mess, but Oldman captivates.

As for the others:
Gerard Butler - love those abs!
Frank Langella - so close, so close.
Bela Lugosi - over the top but eerie.
Christopher Lee - king of camp.
George Hamilton - spare me.
Max Schreck - the original Nosferatu, downright terrifying, and the reason I once checked under my bed for coffins.

See your favorite above? You can vote from this list, or write in your own candidate in the Comments section. And remember, we’re only talking about Dracula here. No Twilight votes allowed!

Posted by kathrynjankowski at 6:58 PM 6 comments

Secrets of the Tarot

No story featuring Gypsies would be complete without fortune-tellers. Whether consulting crystal balls, reading palms, or divining Tarot cards, they add an air of intrigue and drive the narrative forward with revelations and warnings.

For my story, I chose the Tarot. I have the classic Rider-Waite-Smith deck and books to help interpret layouts. I made the reading simple, a classic three-card pattern: past, present, future. My main character, Roza, asks a question and the cards answer.

Let me say first I don't attribute any supernatural powers to the Tarot. Each card can be interpreted several ways and more often than not the questioner will make an intimate connection when prompted by the reader. Nothing spooky about it.

I selected cards that reflect what I've already written, what's happening in the story now, and things to come. The results:

Now I have a scene that confirms events thus far, indicates Roza will overcome distractions if she believes in herself, and hints that the resolution may not be exactly what she expects. It also establishes a bond between Roza and the fortuneteller, both teen girls, which could be important later.

I'm hoping it will be as intriguing to read as it was to write.
Posted by kathrynjankowski at 12:31 PM 13 comments

After completing a c

hapter, I’d tack up the scene tracker around a mermaid sarong draped on the wall behind my desk. It looked nice, but wasn’t suitable for revisions. I needed space I could reach without clambering over bookcases, desks, or file cabinets–which pretty much eliminated every wall in my office.

So, where to put a storyboard that showed the whole book but still allowed easy access while I was deep in revisions?

I considered a huge bulletin board, but that still meant groping around furniture. I wondered about taping the pages to my sole window, but my office faces north and I’m not ready to give up what little sunshine I get in the late afternoon. 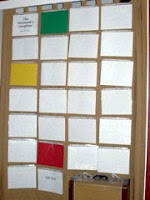 e when I stopped focusing on solid surfaces and started thinking about space. Eureka! My office includes an open closet. Now curtains hang where doors once rolled. On these curtains I’ve pinned page protectors to hold chapters and other pertinent parts of my book.

There’s room for the title, and colored pages to show the different sections: beginning (green), middle (yellow), and end (red).

I also created a chapter template on my computer–Macintosh, the only way to go–that’s more detailed than the hand-written one. Now I can add, replace, or discard, whatever the story dictates, and print out a new page in seconds. Best of all, when I’m finished, the pages can be stored in a binder for quick reference while I’m working on my sequel (or prequel, as the case may be).

Hardly glamorous, but it does the job.

Posted by kathrynjankowski at 7:05 PM 5 comments

A Book is Born

I have a vivid dream life, full of color, drama, even music. When I was younger, my dreams were often twisted takes on everyday life: demons attacking tourists at Disneyland, driving off the San Mateo Bridge (in the days when it was small and the span was raised to let ships pass by), being chased by neighborhood bullies transformed into faceless ghouls.

I’ve flown over trees and lakes, wandered buck naked in schools and offices, and conjured up rooms full of divine delights. Many dreams have been recorded in my journal, but more often I can’t recall the whole thing, just snippets.

Once in a while I wake up with every detail intact. That’s how I got the idea for my children’s novel, The Mermaid’s Daughter, the story of Roza, a girl seeking an ancient power stolen from the sea.

Now the dream didn’t give me the entire tale, just the conflict. Building from that, I created a world populated with characters that intrigue, surprise, and sometimes anger me. The initial version won First Prize for Children’s Fiction at the 2009 San Francisco Writers Conference.

I say “initial” because I couldn’t find an agent who liked the book enough to represent me, forcing me to take a long, hard look at my writing. And I found many places–too many, to my chagrin–where the story lacked depth.

So, with thanks to the agents who gave compliments but passed, I’m determined to revise The Mermaid’s Daughter until it’s a story too good to refuse.
Posted by kathrynjankowski at 4:11 PM 1 comments