There's an interesting post about writers who use different types of imagery to inspire their work over at The Enchanted Inkpot.

I've blogged before about totems scattered around my desk and home. I also rely on visuals. While researching Slavic mythology for my current WIP, I looked for pictures of the thunder god, Perun, a main character in my story. Here's one: 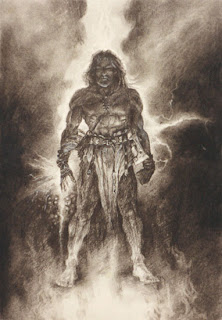 Now imagine you're Nadya, a sixteen-year-old descendant of the mermaid goddess Jurata, living a cloistered life by the Baltic Sea. You unwittingly summon Perun. He insists you're Jurata reborn—killed at his hands after she spurned him to love a human—and claims you for his queen.

When you marry, he'll make you immortal. You'll fly above storms in his chariot and accept the adulation of worshipers at his temple. When his temper erupts, your siren's voice will calm his rages.

The catch: leave and he'll wipe out your family. Hmm, eternity with a hotheaded killer. Not exactly the kind of relationship your average girl dreams of in this or any other world.

But Nadya isn't your average girl. ;-)

Where do you find inspiration?

Posted by kathrynjankowski at 12:55 PM